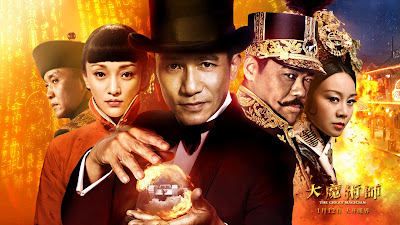 This much anticipated 2012 film marks the return of Tony Leung Chiu-Wai to the big screen a full three years after the release of  the second installment in John Woo's Red Cliff saga. Lau Ching-Wan's presence in the film as co-lead adds another layer of intrigue to the proceedings due to the fact that The Great Magician marks the first time the two superstars have worked together since Patrick Yau's classic neo-noir, The Longest Nite in 1998. Rounding out the cast is the beautiful mainland actress Zhou Xun, who's turned in quite an impressive body of work since her debut in Lou Ye's Suzhou River way back in 2000. Here, she appears alongside these two acting heavyweights as -- what else? -- the object of their affections.

Based on a novel by Zhang Haifan, The Great Magician takes place in China during the early part of the 20th century -- a time when the country was beset by warlords, each vying for power. One such warlord is the mustache-twirling Bully Lei (Lau Ching-Wan), who has his eyes on the lovely Liu Yin (Zhou Xun), a woman he's forcibly taken as his seventh "wife." As one might expect, Yin consistently refuses his affections, instead hoping to use the warlord to release her missing father (Paul Chun Pui), a magician who knows the whereabouts of a scroll that Bully Lei wishes to possess.

Soon, an enigmatic magician named Zhang Xian (Tony Leung) and his troupe of merry men enter the town and set up shop at a local theatre. Knowing Liu Yin's interest in magic, Bully tries to impress her by getting her tickets to Zhang Xian's show. However, it turns out that she and the handsome magician have a secret connection, one Bully Lei may not have anticipated -- Liu Yin and  Zhang Xian are former lovers, and Yin's father was his mentor. However, those expecting Liu Yin to welcome her former flame back with open arms as some kind of long awaited for savior will be in for a real surprise.

Ultimately, The Great Magician plays like a polished version of the typical Lunar New Year comedy. Of course, the film technically IS a Lunar New Year comedy since it was released in Hong Kong a week before the 2012 Lunar New Year, but what I'm talking about here is the form itself.  Whereas those yearly films tend to feature big stars to attract wide audiences, many Lunar New Year comedies could also be considered amateurishly sloppy and haphazard in design. While The Great Magician has some unnecessarily convoluted aspects involving Japanese bad guys, hidden revolutionaries, and an honest-to-goodness magic scroll, the film is not completely undone by these elements.

It probably doesn't hurt that the film has one of Hong Kong best directors at the helm. If we consider Derek Yee's filmography as a director, especially films ranging from C'est La Vie, Mon Cherie (1993) to Lost in Time (2003) to One Nite in Mongkok (2004), we can see that drama is his strength, not comedy, but nevertheless, he puts his talents as a filmmaker to good use in The Great Magician. 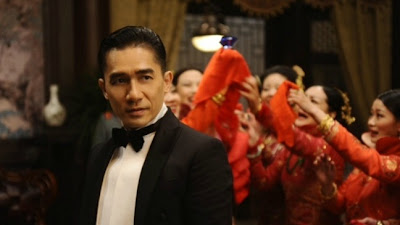 "Stop asking me when The Grandmasters is coming out. Wong Kar-Wai might call me back for reshoots."

Still, while masterfully presented, The Great Magician isn't particularly deep or thought provoking -- whatever political content it seems to have due to the historical setting is all smoke and mirrors to jazz up the film's romantic plot. Truly, it's a movie that's dependent entirely on the actors, rather than plot, message, or theme. In fact, The Great Magician coasts on charm so much that an equally valid title for the film would be The Charming Tony Leung, as the movie lives and dies on the charisma of its leading man. To his credit, Tony Leung has a real knack for being able to embody the kind of character audiences like to see him play and also parody that kind of character at the same time. I think when it comes to showing a talent for "suave self-deprecation" only Louis Koo comes close to matching Mr. Leung. Not to give away one of the best jokes, but the scene in which Zhang Xian instructs Bully Lei on how to give smouldering looks in typical Tony Leung fashion is pretty hilarious.

At first, I have to admit that I wasn't particularly fond of Lau Ching-Wan's character -- the actor seems hampered by a scripted oafishness. But my reaction seemed to be partly by design, as Yee slowly pulls back the curtain to reveal a "villain" who can be kindhearted and oddly endearing. The chemistry Lau Ching-Wan and Tony Leung share is undeniably electric, as it quite comically (and knowingly on the film's part) trumps the relationship either men have with Zhou Xun's character, the ostensible love interest. A lot of the enjoyment I got out of The Great Magician involved watching these guys flip flop between being rivals and being allies, as you're constantly trying to figure out which character knows what and how much during any particular encounter. In fact, the amount of doubletalk on display in any given scene is at least half of the fun.

As for Zhou Xun, she plays her character as remote and impenetrable, a choice which isn't helped by the fact that the filmmakers seem content to relegate her to the background for most of the film. Again, as with Lau Ching-Wan's slow reveal, this, too, seems by design. Thankfully, the filmmakers don't force a happy ending for the sake of a happy ending onto The Great Magician, instead presenting probably the most reasonable resolution to a love triangle of this sort I've ever seen in a mainstream romantic comedy.

In the end, I have to admit that I was generally entertained by The Great Magician. This funny, light film boasts solid direction, a winning cast, some fun cameos, a couple cool magic tricks, and nice production values. But as I said, it's also a film that coasts on the charm of its lead actor. And while that's fine for pure entertainment value, the resultant film feels more like an illusion than anything I would deem to be truly magical.

The Great Magician is available on Region A Blu-Ray, Region 3 DVD, and VCD from Vicol Entertainment (HK).
Posted by Calvin at 9:55 AM