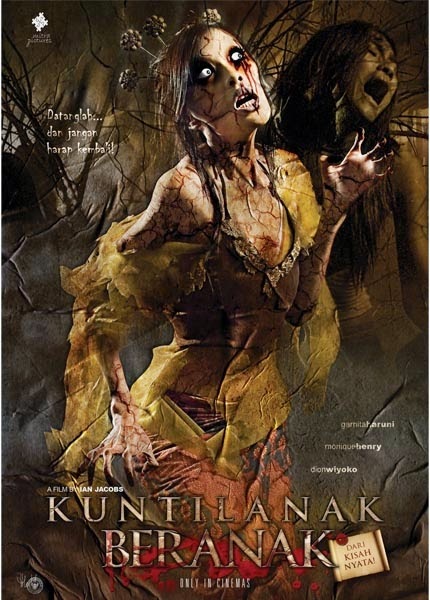 As most horror films tend to do, Kuntilanak Beranak centers on a group of college kids -- three girls (Aline, Mia, and Dea) and two guys (Bim and Bob) -- as they attempt to make an investigative documentary about a dancer who mysteriously disappeared from a local village. An expert in the traditional Javanese dance known as ronggeng, the missing woman is believed to have been murdered six years prior to the events of the film. However, no body has been found, and no charges have been brought against anyone.

Soon, the Indonesian Scooby Gang discovers that the village in which the dancer lived is now practically deserted and that the few remaining locals simply don't want to talk about her. After enduring a series of weird encounters, the kids return to the presumed safety of their respective homes. However, "home sweet home" isn't what it's cracked up to be anymore, as each of the main characters experiences an inexplicable supernatural visitation -- on camera, no less. However, as morons in horror movies tend to do, they remain undaunted by these horrifying incidents and resume their investigation. With the help of the village idiot, this ragtag group of would-be filmmakers decide to venture into an abandoned building to discover the hidden truth about the missing dancer. This, of course, proves to be a horrible decision -- and perhaps not just for the characters either.

From the very first frame, it's clear that Kuntilanak Beranak was inspired by the "found footage" craze that began with The Blair Witch Project (1999) and extended to films like REC (2007), Paranormal Activity (2008), and just about every other horror movie that gets a U.S. theatrical and direct-to-DVD release these days. But unfortunately, Kuntilanak Beranak is a found footage film that doesn't stick to the conceit, often utilizing camerawork and editing techniques that make the movie seem more like a conventional television show with "reality TV" elements. Lots of scenes are inexplicably shot from an extreme low angle or an extreme high angle. While the low angle shots are inexplicable (who's holding the camera and how?), the "sniper's nest" camera placement in other scenes would at least make sense if the "found footage" was culled from security cameras -- but it's not. I guess we're not supposed to be thinking about who is holding the camera to get these impossible shots because -- if I had my guess -- they seem to exist purely as a means to get all of the characters in a single shot, albeit framing them in probably one of the least compelling camera angles possible. Even worse, the way each of the students holds his or her respective camera doesn't correspond to the footage they've supposedly shot.  Murky shot compositions an an annoying over-reliance on a nausea-inducing shaky cam may hide the film's low production values, but they don't make for interesting cinema.

It's hard to excuse this kind of sloppy appropriation of the found footage genre because the film makes it very clear how the footage we're watching was discovered. The movie begins with a frame story set after the events of the movie in which a different group of college kids find a camera in an abandoned building and start watching the footage, which suggests that the entire movie we're about to watch is on the camera, albeit conveniently edited together from everyone else's camera, complete with information that could not possibly have been captured in the footage (flashbacks, for example). Look, I understand that the found footage conceit can be a restrictive formula, but if you're going to go for it, you should probably play by the rules.

Kuntilanak Beranak is also rife with  horror cliches, including the "creepy old man who warns the teenagers." After seeing Cabin in the Woods, it's become really hard to take scenes like this seriously anymore. Similarly, there's a room marked "666," which is supposedly the home of the murdered dancer. However, I'm not quite sure what significance "666" would have for an Indonesian ghost. Such a horror movie signifier might work in a haunted house attraction, but in a film, it takes away from even the remotest sense of verisimilitude. The film also suffers from a bout of lazy plotting. If there is a driving force in the film, it's the kids' mission to uncover the mystery of the missing ronggeng dancer. But instead of piecing together all the clues one-by-one for the big reveal, the kids simply stumble upon a diary (another cliche skewered in Cabin in the Woods) that explains EVERYTHING. If we take the ensuing flashback literally then that means the ronggeng dancer was able to write about every detail leading up to and including HER OWN MURDER. While I can overlook minor mistakes or tiny leaps in logic for movies that are truly entertaining, this film's mistakes are as obvious as they are ridiculous.

It also doesn't help that the film isn't very scary. For the most part, the films "scares" involve a ghost walking in the background, accompanied by creepy fright music. The constant sonic assault would perhaps be more effective if the visuals weren't so hokey and poorly staged. The setting isn't really used effectively either, as it looks like the group is exploring the same room over and over, as the set seems barely redressed for different scenes, if at all. It's clear that they're running up and down the same hallways, even though the characters should be on different floors. Director Ian Jacobs actually could have used this limitation to his advantage and have the characters comment on the obvious similarity, as if an identical, inescapable apartment floor was part of the plot. Unfortunately, there's dialogue indicates that the characters perceive that such a thing is occurring. It's also kind of funny that the characters seem to have no spatial awareness at all. It takes them forever to maneuver the length of a hallway and when they do see a ghost, their solution is to run away no more than ten feet and hide in plain sight, rather than go down the stairs and out the building. It's moments like these when it feels like you're not watching a movie, but  a group of children play pretend, making up the rules as they go along.

However, too director Ian Jacobs' credit, the film does boast a few effective ideas -- like a person the group meets not being in the footage playback and the clever scene centering on Aline's psychic mom that involves a nice bit of camera trickery in which the same actress appears in two impossible places during a seemingly continuous shot. Unfortunately, these moments are few and far between.

So if the story is a cliche and the scares are so-so, then what one hopes for when it comes to horror movies is a group of compelling characters. Sadly, we don't get that either.  As with most horror films, Kuntilanak Beranak boasts a couple of slender, pretty girls willing to show just enough skin (incredibly chaste by U.S. standards) and scream their heads off at the drop of a hat. Sure, there's a suggestion of some rivalry between the girls over Bim, but that subplot doesn't do much to make these women three-dimensional characters. The male characters are no better.. Bob is practically a non-entity and Bim, the "visionary filmmaker" of the group, isn't the kind of leader that inspires much confidence. Honestly, any man who advocates "splitting up" in a haunted apartment building should probably be left to die by his much smarter comrades.

Another big problem with the characters is the question of motivation. It's really unclear who these kids are and why they so desperately want to make this documentary. They appear to be college-aged and make reference to a producer who always rejects their work. Are they budding journalists or filmmakers? Is uncovering the story of the ronggeng dancer important as a piece of investigative journalism or as a supernatural documentary? Whatever the truth, the stakes are so low that it doesn't make sense that these privileged kids would persist in "getting the story" when all logic dictates that they leave the building and never think about the ronggeng dancer again. Without a clear motive, there's no compelling reason for them to subject themselves to such horrors on a continual basis.

Similarly, I can see no compelling reason for viewers to subject themselves to the horror of Kuntilanak Beranak. The only thing scary about this film is that it got a theatrical release and some poor souls actually paid money in a theater to see it.

Kuntilinak Beranak is available on Region 0 DVD from Bonzai Media Corporation.
Posted by Calvin at 3:53 PM