Interview Up at BRIAN DRAKE AT LARGE!

Author Brian Drake (Permission to Die, The Rogue Gentleman) recently interviewed me about my short story collection for his blog, Brian Drake at Large!

In our brief chat, I also end up talking about Singaporean horror, my former professor Albert Wendt, the fake Chinese poet Li-Fen Chou, and, for some odd reason, David Hasselhoff!

Check out the interview here!
Posted by Calvin at 12:00 AM No comments: 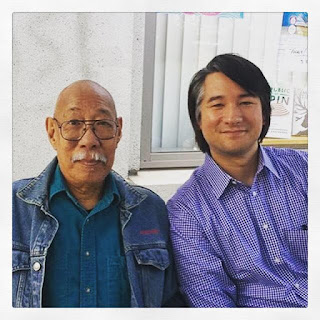 THE SUSHI BAR AT THE EDGE OF FOREVER IS AVAILABLE TODAY! 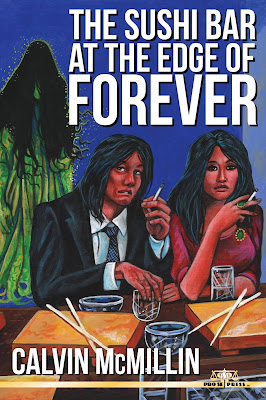 My short story collection, The Sushi Bar at the Edge of Forever, is now available for purchase in paperback and e-book. Here's the press release from my publisher, Pro Se Productions.

In 2015, Pro Se Productions published ASIAN PULP, an anthology featuring tales with Asian leads and a follow up to Pro Se’s best selling BLACK PULP. Author Calvin McMillin’s haunting noir horror story was included in that collection and now joins five other stories by McMillin in a new collection from Pro Se entitled, like the original story, THE SUSHI BAR AT THE EDGE OF FOREVER.

“Telling great stories,” says Pro Se Editor in Chief Tommy Hancock, “is what a talented author does. A part of that is being able to take various aspects of different genres and blend them together into a written concoction that knocks readers off their feet. Calvin McMillin’s THE SUSHI BAR AT THE EDGE OF FOREVER first accomplished that as a well delivered, thought provoking short story in ASIAN PULP and now he does it again six times over in a collection of the same name. The places that Calvin takes readers in each of these stories are unique and set just as much in a corner of our own souls as they are in a sushi bar or anywhere else. Both pathos and terror abound in this collection.”

The realms of fantasy, horror, and noir converge in THE SUSHI BAR AT THE EDGE OF FOREVER, an eclectic short story collection from author Calvin McMillin.

A ghostwriter wishes to break free of his bestselling horror series and reveal his true identity to the world, but he soon learns that plagiarism can have ghastly consequences…

A beautiful tourist is offered a shot at fame from a world-class modeling agency, but a disturbing incident buried deep in her past may hold the key to surviving the audition…

A private detective visits a sushi bar and strikes up a conversation with a mysterious stranger, a fateful encounter that will cause him to question not only his sanity, but his very existence…

These and other exciting tales make up THE SUSHI BAR AT THE EDGE OF FOREVER , a spellbinding collection of six pulp stories that will plunge you headlong into a surreal world of mystery, menace, and the macabre. From Pro Se Productions.

Featuring an evocative cover by Larry Nadolsky and cover design and print formatting by Percival Constantine, THE SUSHI BAR AT THE EDGE OF FOREVER is available now at Amazon at http://www.amazon.com/Sushi-Bar-At-Edge-Forever/dp/1530327717/ref=sr_1_1?s=books&ie=UTF8&qid=1457110681&sr=1-1 and Pro Se’s own store at www.prose-press.com for 15.00.

Calvin McMillin’s story collection of noir and horror is also available as an Ebook, designed and formatted by Russ Anderson for only $2.99 for the Kindle at http://www.amazon.com/Sushi-Bar-Edge-Forever-ebook/dp/B01CH8DMQ6/ref=sr_1_2?s=books&ie=UTF8&qid=1457110681&sr=1-2 and for most digital formats via Smashwords at https://www.smashwords.com/books/view/619939.

For more information on this title, interviews with the author, or digital copies to review this book, contact Pro Se Productions’ Director of Corporate Operations, Kristi King-Morgan at directorofcorporateoperations@prose-press.com.

To learn more about Pro Se Productions, go to www.prose-press.com. Like Pro Se on Facebook at www.facebook.com/ProSeProductions.
Posted by Calvin at 3:56 PM No comments: