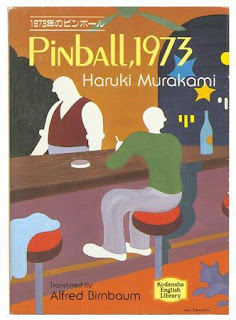 Published in 1980 as 1973-nen no pinbōru and first translated into English in 1985, Pinball, 1973 possesses an even more meandering narrative than Murakami’s slim debut novel. If there’s a plot (and I’m not entirely convinced that there is), it boils down to this: the story of one man’s search for an old, possibly magical pinball machine. But despite its title and the narrator’s insistence that “This is a novel about pinball,” Pinball, 1973 doesn’t really center on the titular machine until more than halfway through the story. It’s not until then that the novel actually coalesces into—well, just that—a novel. Earlier segments of the book seem more like a loose patchwork of narrative fragments, random reminisces, and occasionally clever musings.


As I reread the novel this summer, I have to admit that I was less taken with the novel's most absurd premise: one morning, the protagonist wakes up in bed with two beautiful twin sisters. These women begin to take over his life: they move into his apartment, act adorably quirky at all times, and engage our hero in nightly activities that I presume would make a great letter to Penthouse. The phrase "Manic Pixie Dream Girl" didn't exist in 1980, but that's exactly the function these two women serve. Having little internal life of their own, the twins seem to exist solely as catalysts of change for the male protagonist -- they are meant to inspire, providing emotional and physical support, as the narrator grapples with his own personal issues. While entertaining at times, they are plot devices, not fully drawn out characters. In retrospect, this whole subplot seems silly and juvenile -- like a male otaku fantasy times two. Still, to give Murakami the benefit of the doubt, perhaps that is part of the point, given what ultimately happens between the twins and the narrator.

I wasn't a fan of the book when I read it several years back, and my opinion hasn't exactly improved. When all is said and done, I think Pinball, 1973 is Murakami-lite. But when read alongside Hear the Wind Sing, it makes for an effective warm-up for the main act: Wild Sheep Chase.

This review was originally published at LoveHKFilm.com, the former home of Ronin on Empty, on September 30, 2010. It has been edited to reflect my recent impressions of the new translation. The original review can be found here: http://www.lovehkfilm.com/blog/roninonempty/?p=370