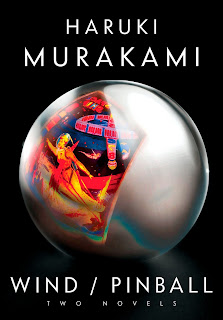 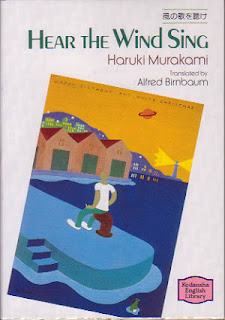 “There’s no such thing as perfect writing. Just like there’s no such thing as perfect despair.”* These are the first lines of Haruki Murakami’s debut novel, Hear the Wind Sing. Spanning much of the month of August 1970, the book details — among other things — the plight of a twenty-one-year-old man who escorts an inebriated stranger back to her home, only to find himself passing out and spending the night. When she wakes up the next morning, the mystery woman has no idea how she got home and is understandably upset about what she did or didn’t do with our unnamed protagonist. The usual misunderstandings ensue, although the outcome is less Three’s Company-style high jinks than the premise might suggest.

Along the way, we learn more about the narrator's past as well as the origin of his friendship with a character nicknamed "The Rat" (a man who will figure prominently in both Pinball, 1973 and Wild Sheep Chase). Subsequent encounters with the mysterious woman occur, but not exactly of the romantic variety.

At less than one hundred pages, Hear the Wind Sing makes for a brisk summer read. A lot of the elements Murakami fans have come to love in his novels appear here in their earliest existing forms. If Murakami’s career is a banquet, then Hear the Wind Sing is a light, but tasty appetizer -- one that leaves you wanting more. And more is what he would deliver.****

NOTE: If there is one complaint I have about the book, it's that it's missing the two pages present in the Birnbaum translation, a postscript of sorts that ties up the narrator's vested interest in the fictional American writer, Derek Heartfield. [UPDATE: Translator Ted Goossen graciously responded to my inquiry and revealed that in the version of Hear The Wind Sing published in Gunzo, there was no postscript. It was only added in the book version. When Murakami's complete works were published later, that postscript was removed. Thus, this is the "official" version.]

**In his introduction, Murakami uses the phrase "love mingled with a bit of embarrassment" to describe his first two novels, so perhaps "embarrassment" is the explanation for why he wouldn't allow them to be published outside of Japan.

****As a side note, the book was turned into a movie in 1980, one that Murakami himself disliked. If anyone has a link to a trailer, I’d love to see it.
Posted by Calvin at 2:03 AM