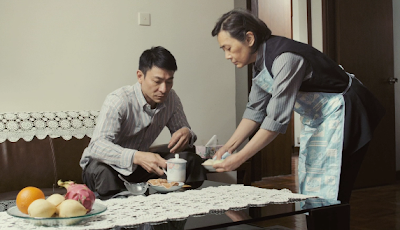 Loosely based on the real-life story of producer Roger Lee, this touching film centers on the relationship between an old amah named Ah Tao (Deanie Ip) and her longtime "employer," Roger Leung (Andy Lau). From the very beginning, Ann Hui is able to signal an entire history between the two characters as we watch Ah Tao quietly prepare and serve a meal to Roger, who accepts her service on his behalf with little remark, viewing it as simply part of a daily routine. There is a subtle undercurrent of warmth to their relationship, but it comes without the familiar niceties one might expect.

Orphaned during the Japanese occupation of Hong Kong, Ah Tao has lived with Roger's family for decades, long before he was born. Over the years, however, the rest of the Leung family has either died or left for the United States and parts unknown, with Roger now the sole family member still living in Hong Kong. Together with Ah Tao, he resides not in a palatial family estate, but a cramped apartment, perhaps because Roger spends most his time traveling as a film producer.

The plot, if we can even truly call it that, soon kicks in when Ah Tao suffers a stroke. Roger, who has been cared for by Ah Tao for years, now finds himself in the position of caregiver. But Ah Tao doesn't want to be a burden to Roger and asks him to put her in a retirement home. He then embarks on an investigation, and in an amusing, but sobering conversation with a nursing home owner (Anthony Wong in a delightful cameo) the cold, hard facts of his decision -- fees, extra costs, etc. This short sequence is oddly absorbing, as each mundane detail seems significant in a very real world way, rather than merely being important as a vehicle for plot or social critique

Once inside the nursing home, Ah Tao discovers the bleak reality of her new digs. Still, she's able to make friends, despite the fact that her life there seems somewhat lonely and depressing. Here, we meet the spry retiree Uncle Kin (Paul Chun Pui) and Ms. Choi, a kind, but no-nonsense nursed played by Qin Hailu. Audience members expecting Roger to put his bachelor days behind him and find love with Ms. Choi will be sorely disappointed. You're watching the wrong movie.

The central relationship is not a romantic one, but an ostensibly familial one. Ah Tao rejoices in Roger's occasional visits to the nursing home, as he'll come to take her out for lunch or some other modest excursion. Over the course of the film, we come to realize that Roger is like the son Ah Tao never had, while she obviously demonstrates a maternal warmth for him that his own mother, as pleasant as she seems, clearly lacks. But just as the unspoken bond between the two becomes stronger and perhaps explicit, fate has other plans than a happy ending. 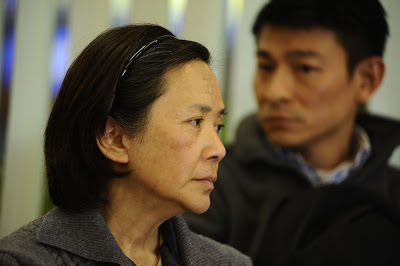 While I suppose A Simple Life could be classified as a "tearjerker" simply due to its ability to elicit heartfelt reactions to its narrative, what I really appreciated about Ann Hui's understated film is that it is neither overtly sentimental nor crassly manipulative when approaching such melodrama-ready material. There are so many films of this kind -- not just in Hong Kong, but around the globe -- that feel so patently phony. You've seen them before: a package covered in big stars, glossy images, and warm tones, but totally empty inside. A Simple Life is not one of those films.

While Ann Hui deserves the lion's share of praise for her direction, the film hinges on the chemistry between stars Andy Lau and Deanie Ip. Although Lau has played his fair share of heroic, comic, and romantic roles, there's a certain cold, enigmatic quality to his acting style and mannerisms. In certain cases, this has been to a film's detriment, but here, I think his tendency towards emotional opaqueness works well for the film. The choices Roger must make as well as his demeanor when making them feel incredibly real. This may be startling for those expecting emotional scenes to be either driven or punctuated by over-the-top waterworks, tortured expressions, or primal screams. Unless you're the star of a reality show, people do not walk around with cameras on them 24-7. Some actions and reactions in real life are quiet and undramatic, perhaps even cold or contradictory on the surface. Together, Ann Hui and Andy Lau are able to capture this fact with startling accuracy.

Of course, Deanie Ip is wonderful as Ah Tao -- perhaps so good that it's difficult to single out what she's doing so right. And maybe that's the highest praise for an actor since Ip totally embodies her character. I never once thought of her as an actress. It doesn't hurt that her character is selfless, kind, and intensely likable. The scenes of Ah Tao waiting with quiet hopefulness in anticipation of Roger's visits and her subsequent joy in their sometimes feisty interactions is a real joy to behold. It might sound sappy to praise the film with a cliche like "heartwarming," but I commend A Simple Life for its ability to achieve this without resorting to cheap cliches.

Charmingly understated and packing a real emotional heft, A Simple Life is not only the best Hong Kong film of the year, but one of the best HK films in a very long time.

A Simple Life is currently available on Region A Blu-Ray, Region 3 DVD, and VCD from Hong Kong distributor Panorama.
Posted by Calvin at 9:30 PM