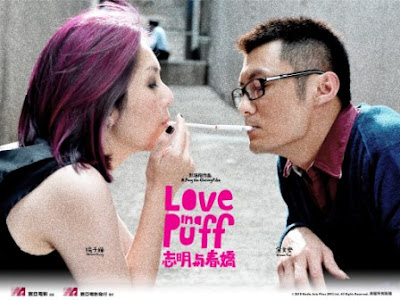 If anything, this is the aspect of smoking that Pang Ho-Cheung captures beautifully in Love in a Puff. Billed as a romantic comedy, this 2010 film spotlights the plight of smokers in Hong Kong, while focusing its attention on two would-be lovers played by Miriam Yeung and Shawn Yue. The film takes place in February 2009 -- a crucial time period just after the Hong Kong Health Authority enforced a ban on smoking in any inside area but just before cigarette prices went up astronomically. Within this narrative frame, Love in a Puff amounts to a sometimes funny, sometimes tedious week-long journey into a burgeoning relationship between two smokers. While following these two characters, we're plunged headlong into the world of several hip (and not-so hip) urbanites as they try to find love in a pool of alcohol and a fog of smoke.

After a genre-bending opening sequence,  Love in a Puff introduces us to a group of smokers huddled in an alley and looking like veritable outcasts from society. Among this group of hotel bellboys and pizza delivery guys, there's Cherie (Miriam Yeung), a sales girl at Sephora, and Jimmy (Shawn Yue), an ad exec who's just gone through a humiliating break-up.

Immediately, there's an attraction between the two, and Cherie and Jimmy begin exchanging text messages later that night. Soon, Cherie finds herself ditching her pal's birthday party to meet up with Jimmy. It turns out he's having hotpot with a group of his friends that very same night and is willing to step out with her. After a fun evening together, Cherie casually drops a bombshell on Jimmy -- she's got a boyfriend. Uh oh.

As many men in his situation would do, Jimmy tries to play off his obvious disappointment, but despite their best efforts to save face, it's still an awkward moment between the two. Nevertheless, an attraction remains -- on both sides. Will they go for it? What happens when Cherie's boyfriend finds out? And is Jimmy really ready to jump into a relationship so fast? These are questions that the film must soon begin to address.

After the initial "meet cute" set-up, Love in a Puff moves into very realistic territory, as the two would-be lovers no longer flirt as comically as they once did, now proceeding with caution, trying to read each other without giving away too much of their own feelings. In other words, it's typical "Are we dating? Is this a relationship? Do you really like me?" phase that most people in burgeoning relationships find themselves going through.

Love in a Puff was given a Category III rating for its foul language and heavy depiction of smoking; however, the stern rating will be largely meaningless for non-Cantonese speaking audiences. Not only will the excessive smoking be largely a non-issue, but the vulgar jokes will either fall flat or simply not be as readily apparent via English subtitles. 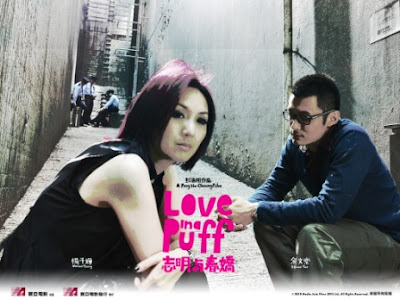 Although the film definitely has its fair share of problems, the performances by its lead actors are quite strong. Miriam Yeung  tends to play scenes in a very real, measured way, rather resorting to the over-the-top histrionics required by more mainstream, dumbed down Hong Kong comedies. In the scenes with her character's live-in boyfriend, Yeung is able to convey a myriad of conflicting feelings without doing much at all. For his part, Shawn Yue possesses an understated charm that works well for his character, especially when his behavior can sometimes seem unnecessarily mean-spirited or rude.

But while the actors do possess a clear chemistry, I was surprised that there wasn't much passion on display. If I remember correctly, the two characters don't even kiss. I have to admit, I'm pretty sick of watching HK movies where the leads act like they're still in grade school. This is a Category III film, after all. No one's asking for Sex and Zen-level bedroom acrobatics, but the sexual attraction that would necessarily motivate such a romantic coupling is practically nonexistent onscreen. Whether this decision is based on the dictates of the culture, the studio, or the  actors' PR teams, I don't know -- but it doesn't help the movie. The age gap between the two actors -- although certainly acknowledged within the narrative -- also feels like a strike against truly buying into their onscreen romance. Ultimately, Miriam Yeung and Shawn Yue feel like goofball pals, not paramours.

The film has one quirk that doesn't work so well either. Director Pang Ho-Cheung intersperses the narrative with camera confessionals from the film's principal characters as well as people who aren't even characters in the film. No matter who's depicted onscreen, these interludes are largely intrusive and useless, attempting to provide a false sense of realism or social commentary, but instead just distracting (and detracting) from the main narrative. It's worse that Pang goes on to deploy these "funny" confessionals during the end credit sequence, spoiling a suitable, if not entirely exhilarating finale with more documentary footage of minor and largely insignificant characters. This speaks to a bigger part of the film's problem -- Pang Ho-Cheung doesn't seem to know how to end the movie, as it concludes in the worst way imaginable, considering the journey we've taken with these characters thus far.*

Whether you're a smoker or a non-smoker, I think you'll find moments in Love in a Puff to be charming, relatable, and even heartbreaking. But while the depiction of HK's dating culture might pull local audiences, I would bet most non-Cantonese speaking audiences, at least, would find this to be quite a trifle of a movie. I'm giving the film a marginal recommendation, despite the clear reservations I have about Love in a Puff. While I was definitely attracted to its hook of exploring a smoking subculture and I do appreciate the comparatively more realistic take on relationships (aside from its treatment of sex), I found Love in a Puff  to be as ephemeral as a puff of smoke.**

Love in a Puff is available on Hong Kong VCD, Region 3 DVD, and Region A Blu-Ray from Mega Star.

*MILD SPOILER ALERT: Eventually, the end credit "confessionals" conclude with footage of Cherie's ugly duckling pal, who was previously rejected by a Facebook stalker (Shawn Yue's discussion of her is especially  cruel), as she caterwauls after being stood up. Not exactly the best way to end a film, eh?

**Although I possess no desire to revisit these characters, a la Richard Linklater's Before Sunrise/Before Sunset, Pang Ho-Cheung did direct a sequel, Love in the Buff in 2012.
Posted by Calvin at 11:12 PM