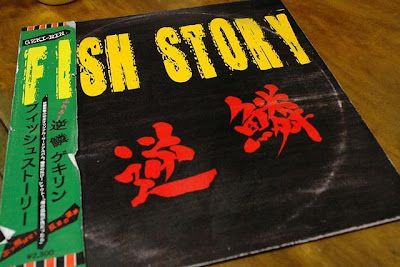 An album that changes lives.

I think it's rather appropriate that the very first review for the revitalized Ronin on Empty is Yoshihiro Nakamura's revelatory Fish Story. This plucky, underdog of a movie offers viewers an uplifting, altogether funny commentary about the power of art to enact real change in people's lives. In a lot of ways, I think Fish Story has had a similar effect on me, as the film, among others things, did much to renew my interest in Asian cinema after leaving LoveHKFilm.com last year in the wake of my father's passing.

Delivering a proper review of Fish Story, however, puts me in a fairly tricky situation as a writer. Aside from hearing good things about the movie, I went into my first viewing of Fish Story knowing absolutely nothing about its premise. Having seen it twice now, I strongly feel that "going in blind" is the ideal way to experience the story. Of course, a film review requires at least a cursory treatment of the storyline, so I will have to tread carefully about plot details in the following paragraphs, lest I spoil the experience for potential viewers.

Based on the novel by Kotaro Isaka, Fish Story is Yoshihiro Nakamura's second adaptation of Isaka's work. The first was 2007's The Foreign Duck, the Native Duck and God in a Coin Locker, the second was 2010's Golden Slumber, and the fourth was 2012's Potechi. I admit that I haven't yet seen these films, but based solely on the merits of Fish Story, I plan on actively seeking them out.

Fish Story is exactly that, a "fish story," one that begins -- of all places -- in a desolate, garbage-infested Tokyo wasteland in 2012. Only a few hours remain before a comet -- plainly visible in the sky above -- will crash into the planet and destroy all of humanity in the process. Amidst these deserted city streets, a lone man emerges, albeit on an electric mobility scooter. Played by Kenjiro Ishimaru, the man abandons his ride when he discovers a record store that -- to his complete shock -- is still open for business! How is that possible? Didn't they get the memo about Armageddon?

Inside, the befuddled man finds the proprietor of the establishment (Nao Omuri) and a dorky customer casually talking about music -- even as the world is seemingly coming to an end. How could they possibly be listening to old albums at time like this?, the disgruntled old man wonders aloud. To paraphrase the clerk and the customer, "Why wouldn't we?"

During this opening sequence, which playfully comments on American disaster movies to great effect, we learn about Gekirin, a forgotten band that released one album -- the titular Fish Story -- before calling it quits. From here, the film begins its long, strange journey, as the narrative alternates amongst at least four different storylines set during different eras. 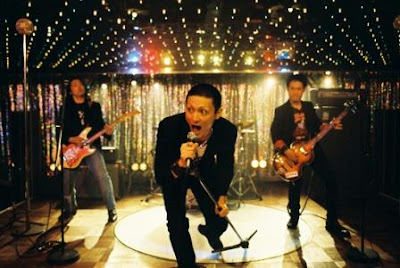 In the time period that spans 1973 to 1975, we meet Gekirin, a punk band before punk even existed. As the movie reminds us, The Sex Pistols have yet to debut in England when we meet Gekirin. As a result, their sound is a bit too much for Japanese audiences to take. Even as a manager takes interest in their work, the studio wants them to water down their music to make it palatable to the masses. The band -- with Atsushi Ito as the lead guitarist and Kenjo Kora as its charismatic vocalist -- is less than happy about the studio's commercially-driven demands. This section of the film, equal parts funny and dramatic, plays out like the pinnacle of all musical bio-pics, despite the fact that the band in question never even existed. But the film isn't content to stay with these characters.

Surprisingly, the film then shifts to 1982, where we meet  a meek university student named Masaru (Gaku Hamada), who has been given the unenviable task of driving around two loutish classmates to meet some girls. During their little road trip, they talk about Gekirin's release of Fish Story, which, for reasons yet to be explained, boasts a minute long section of complete silence. What happened? Urban legends suggest that a woman was screaming on the recording, and only those with psychic abilities can hear it.  This little detail took me back to all the stories I was told as a youth about the danger of playing "Stairway to Heaven" backward, what KISS really stands for, and the origin of the scream on "Love Rollercoaster."  During the ensuing double date, Masaru is the obvious fifth wheel -- that is, until one of the girls, a self-proclaimed psychic, says he'll meet the woman of his dreams tonight. Is she psychic or giving him a signal? When one of the punks wants to take this girl to a love motel, Masaru's mettle will be tested -- in surprising ways.

The film then shifts to 2009, where we bear witness to a chance encounter on a cruise ship between a different young woman (Mikako Tabe) and a waiter (Mirai Moriyama), who may be more than he seems. It seems the girl fell asleep during the trip and forgot to disembark, and is now headed to Hokkaido. After a very funny first encounter, the waiter takes pity on her, and tells the young girl the story of his life. And then terrorists show up. To tell anymore would spoil the fun. 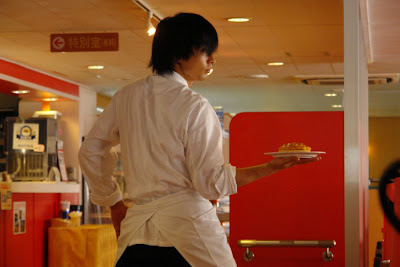 Mirai Moriyama is the best waiter you'll never have.

As you might have gathered thus far, every single major storyline in the film has to do with tenacious underdogs forced to stand up for themselves in the face of overwhelming odds. The film constantly subverts expectations, creating situations that initially seem all-too-familiar, before sending them askew in exciting, often hilarious ways. Somehow, Nakamura balances all these storylines deftly, as you never feel like a character or characters are getting shortchanged in favor of another.

And then the most amazing thing happens -- all these disparate chronologies line up in surprising ways during an extended sequence set to "Fish Story," the enigmatic, rousing song composed by Gekirin.  So many films fail to deliver on the ambitions of their premise, but Fish Story sticks the landing gracefully. For my money, the film delivers one of the most satisfying and exhilarating endings in recent cinema history.

For anyone interested in Japanese cinema or great films PERIOD, I wholeheartedly recommend Fish Story.  It's genuinely moving, narratively challenging, and incredibly funny. How many movies do you know that are set in at least four different time periods, spanning the 1970s to the ostensible end of the world?

There are numerous films that employ style over substance, but it's that very substance of Fish Story that makes all the cinematic and narrative pyrotechnics ring true. For me, Fish Story is about the creation of art, and the optimistic belief that maybe -- just MAYBE -- no matter how poorly received or ignored something was in its own time period, that art/music/literature still has the power to change people's lives, and -- quite possibly -- save the world. All in all, quite a "fish story" in itself. 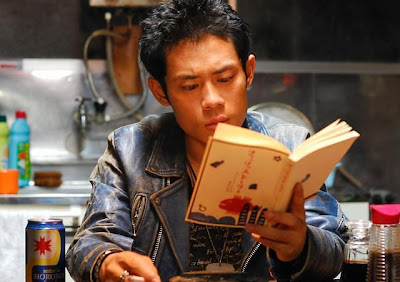 While a Region 2 English subtitled version exists, Fish Story remains sadly unavailable on Region 1 DVD or Blu-Ray. However, at the time of this writing -- the movie can be seen on Netflix in glorious HD.
Posted by Calvin at 5:49 PM